Aboriginal Rock Art has to be the ultimate natural art  – it is painted on naturally occurring rock formations and executed with natural pigments or bees wax found nearby (or traded with other tribes) and applied with brushes made from grasses.  As I’ve travelled around Australia with an interest in art I’ve naturally been drawn to the areas where Aboriginal Rock Art can be found. It has been very interesting over the years to compare the different styles to be found in different parts of the country and to ponder on the lives of the artists at the time of painting.  Standing before a rock face covered in layers of paintings done many hundreds of years ago, fills me with a sense of wonder and intrigue.  Sometimes the intent of the artist is clear as they paint what is important in their lives – food, sex, ceremonies, dreamtime stories, but the knowledge of some symbols has been lost forever and no-one alive today is able to interpret the meaning of them so that they will forever remain a mystery.

What we can tell from looking at natural Aboriginal Rock Art

Some things are easy to figure out, others need to be related to the environment at the time of the art which may have been very different to the current conditions.  Others are in the unsolvable puzzle category and will always remain so. 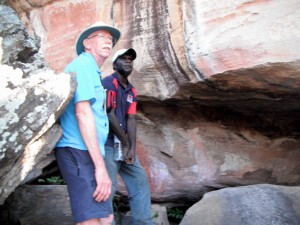 Knowledge of ancient lifestyles and traditions is retained by some custodians and it is truly wonderful to have the opportunity to learn this from current traditional owners willing to impart this to future generations.  Hopefully it’s value will be realised and steps taken to preserve it for the future.

What we can tell about history from Aboriginal Rock Art

All the colours of rock art fade over the years with red ochre (haematite) lasting the longest.  Some of the very oldest art was very simplistic in style such as the dynamic figures of Western Arnhemland and the Bradshaws figures of the Kimberley and art in the Grampians in Victoria.  They are mostly red only. 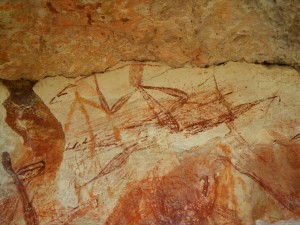 In Western Arnhemland there are red ochre – older pictures – of boomerangs, running figures with spears, and emu prints which is evidence that the vegetation was very different then.  It was open grassland where emu and kangaroos could roam and be hunted using spears and boomerangs which is not possible today as there are too many trees. The environment changed from being inland and colder to a period when the temperature rose, sea levels became higher and the land bridge between New Guinea and Northern Australia disappeared. This led to the estuarine period with the development of big tidal rivers, saline mudflats and mangrove swamps.  Later the environment was modified again to include freshwater billabongs and floodplains much as it is today. (1) 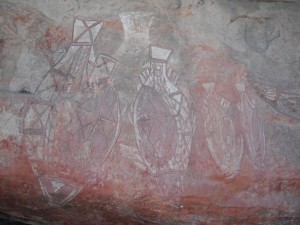 The newer paintings reflect this changed environment with more paintings of fish, long neck turtles and waterbirds being the food of the day. Paintings that have been dated by various methods and are more recent became more realistic and intricate with skeletons in the X-ray style and decorative patterns.

The feelings wrought by the sight of ships off shore by those earliest inhabitants of Australia can only be imagined, as later rock art started to reflect paintings of ships and of men with pipes, big boots and guns. (Contact Art) 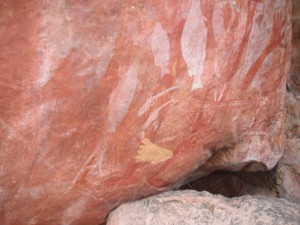 What we can tell about lifestyle from Aboriginal Rock Art

Like artists anywhere, ancient aborigines painted what was interesting to them.  I imagine that the area where they lived determined how much leisure time was available for painting. What interested them most was food.  In the deserts, gathering food and finding water probably took up most of the time.  The aborigine rock art is always in glorious places like big caves where it would have been good to shelter from stormy, wet or hot weather, have a feed and gather for ceremonies.  There is always a source of permanent water nearby.

Paintings of instruments such as the didgeridoo, figures with headdresses and the “dancing”  like Bradshaws  paintings hint at the gatherings that would’ve been held in these places.

In Western Arnhemland there are many female figures with intricate genitals painted along with the food animals, fish and birds leading to the assumption that sex played a big part in the lives of these mainly male artists. Some of the figures depicted have heads like animals or insects such as the praying mantis.

The lifestyle and diet of the desert tribes would have been, I imagine, quite different from the diet of those living in the Kimberley, Arnhemland or Cape York where food and water was plentiful. 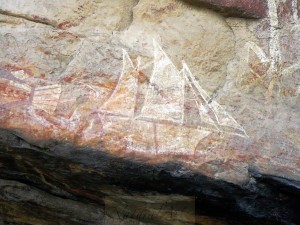 The lifestyles of all the aborigines changed dramatically with the arrival of European settlers.