Aboriginal Natural Rock Art styles vary a lot around Australia, not only did they change and evolve over the years in the same place, but they vary from one region to another.

Of interest to me is the way that the olden day artists would paint over the top of other, older paintings so that there are often layer upon layer on one rock face.

The Central Australian tribes used the dot style which is still used today by modern artists.

Older style West Arnhemland dynamic figures, which are moving figures, for example dancing or running with a spear. 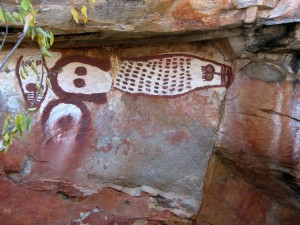 eyes is unique to the area.

The Bradshaws art of the Kimberley often represents many wildly dancing stick figures.

These are engravings in rocks, possibly done when there were no convenient caves with blank walls.  Petroglyphs at Innaminka show star formations such as the Seven Sisters (Palaides). This implies that those ancient cultures would have had knowledge of the stars. That knowledge was a part of their total understanding of their environment and the seasons that governed the land. 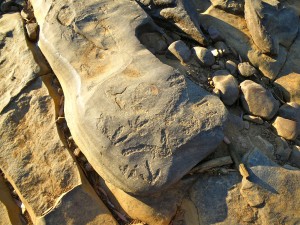 Petroglyphs are seen in South Australia near the Flinders Ranges and in Central Australia as well as in the north.

Stone arrangements are seen in areas where there are no caves or rocks to paint or carve on. For example in East Arnhemland where the people “drew” pictures (with rock arrangements) of the Macassan ships some of which still remain today. 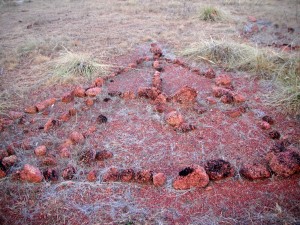 Stone arrangements can also be found in the Western and Central desert areas.

Many intriguing and unknown symbols such as strange animals and just plain unrecognisable marks are in most places.

The colours are of nature – colours of the rocks but also the colours of the animals, grasslands and earth. Pigments of Red Ochre, Yellow Ochre and earthy violets were  ground from the rocks themselves or traded during gatherings with other tribes and were one of the most valuable commodities.

White paint was made from clay, and black paint from soot.

In the years after Europeans arrived in Northern Australia previously unknown blue pigment was introduced to the rock art and was discovered to be from a whitening solution called Reckitts Blue.  Surprisingly, it has stood the test of time and can still be seen on the rocks today.

The pigments were ground to a fine powder in a rock hollow with a round smooth rock. In some places the paint preparation areas can still be seen giving the impression that the artist has just walked away and will soon return to continue painting.

Animal fat, blood and water were mixed with the pigments before application.

The paintings were done by finger application, or using brushes made of reeds, grasses, and sticks.

Sometimes sticks of pigment or charcoal from the fire were used to apply paint directly to the rock.

Stencils (usually of hands) were done by blowing paint from the mouth. 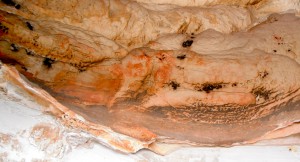 Modern day Aboriginal artists are no longer painting on rock sites but use bark panels, paper and fabric.

Many artists still use brushes made from reeds, grasses and sticks.

The methods are adapted to modern materials but retain the styles of their forbears.

Natural earth colours are still used by Arnhemland artists today and the cross hatching style of their ancestors continues.

There are many other variations of styles between different regions. 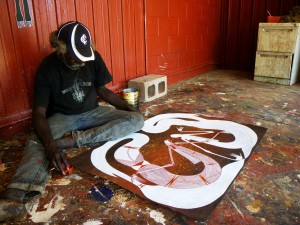 The paintings still tell stories of things that are of interest in the lives of the artists, animal dreamtime stories, figures and the path to the waterhole.

My appreciation of the Aboriginal Rock Art in Australia (and all types of art) is, I think, an aspect of learning to be a better artist in much the same way as the formal art courses involve studying the ideas and methods of traditional painting.  I am inspired by the beautiful colours and subjects of those olden day Aboriginal artists and the places where the art is located. I am fascinated by the way the art tells us about the lives those artists were living all those years ago.

Visiting Aboriginal Rock Art sites and the wonderful places where it was, and still is, created is certainly a very intriguing pastime. If time is taken to sit, watch and listen to the sounds of the bush in these historic places, it is possible to feel utter peace and a sensation of being at one with the natural world. I sincerely hope that it will remain so for future generations to wonder about and that the stories will be continue to be passed on.