What I’ve learnt about ancient cultures

Having been lucky enough to attend guided tours in various places I have learnt that the ancient aborigine tribes had a social structure with complicated (and strict) rules designed to prevent intermarriage mostly called the skin system. Everyone is assigned a skin name and there are rules governing which groups can intermarry. Every 4 generations the skin names repeat (Kakadu N.P.). 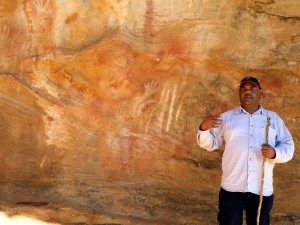 Tribes around Mutawinji had totems which were animals.  People were not allowed to eat their totem. Some tribes get their totem from their mother and others from their father.

Supreme management of the environment and future food sources by the totem system that prevents harvesting of animals when they are breeding and other measures ensured continuous supply of food  for years to come. Other rules and customs preserved precious water supplies. Dreamtime stories kept children from straying for fear of the nasty things that would happen if they should wander or misbehave.

At Mutawinji, where there is a water symbol painted or carved on a rock – if the viewer turns 180 degrees they will be looking out at the next water source which is usually a rocky outcrop with a pool beneath.

At Injalak Hill in Western Arnhemland our guide told us a story of the echidna and long neck turtle (both represented on a rock face) who had a fight.  In the end there was no winner but the turtle agreed to stay in the billabong whilst the echidna stayed on the hilltops. The paintings therefore being a way of explaining why things are so.

Some of the common Aboriginal Rock Art symbols 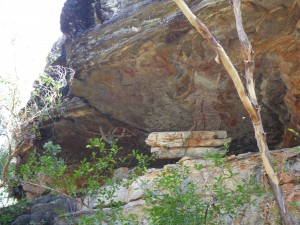 Stories and paintings of Rainbow Serpent in it’s various forms seem to be represented across all the areas of Australia. The Rainbow Serpent was responsible for forming gorges with permanent waterholes such as Glen Helen Gorge in the Mac Donnell Ranges as told to my wide eyed daughters by a local aborigine many years ago. Keeping people in line was another of Rainbow Serpent’s “duties” as in the story told by a ranger in Kakadu N.P. recently where a small child was crying for some sweet lilies. She was given bitter lilies and cried all night.  The Rainbow Serpent came and killed the tribe for not looking after the child properly and letting her cry all night.

In Western Arnhemland I saw a painting of a huge, fearsome Rainbow Serpent with big fangs keeping guard from one cave. 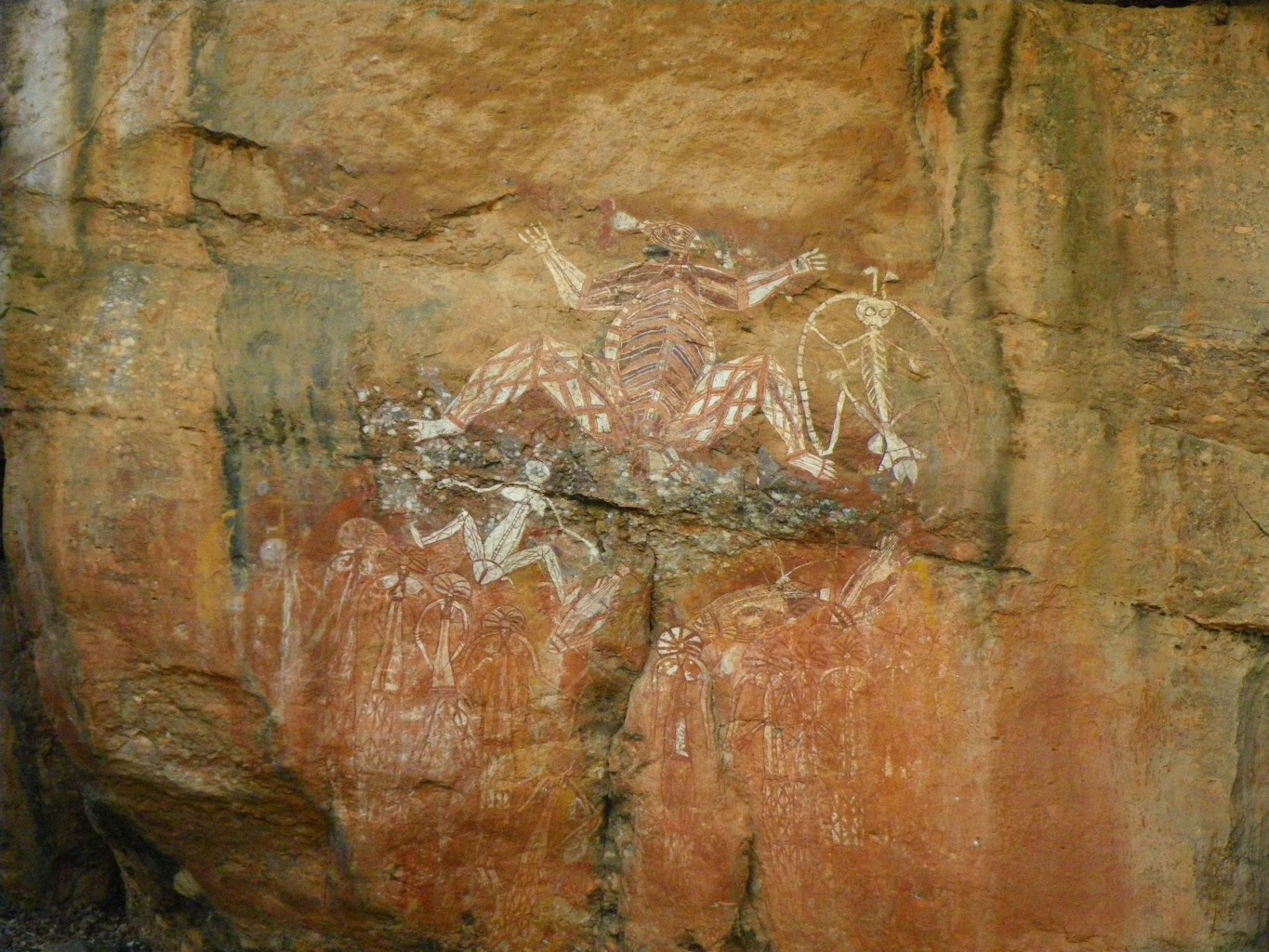 Many different forms of Lightening Man seem to appear in different areas of rock art, probably the most famous one being at Nourlangie Rock in Kakadu N.P.

Creation figures are common sometimes a man and sometimes a woman.  The best one I’ve seen is the Creation Woman at Injalak Hill. with her dilly bags (her children) which she distributed as she roamed around the countryside.  They later became various tribes. 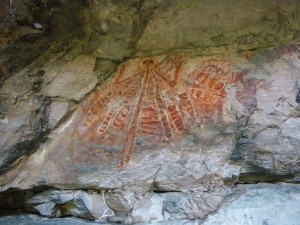 Spirit figures were often painted high on the roof of caves where no mortal could reach –  they had wiggly long arms and legs. Sometimes called the Mimi spirits.

Female figures are very common in Arnhemland but male figures do occur. Possibly this is because it was mostly the males who were artists.

The figures with animal and insect heads are interesting.

Kangaroos, emu, barramundi and other fish, long neck turtles, geese are often represented in rock art as, being food, they would have been such an important part of the artists’ lives.

Hands are common to most areas of Australia – some painted,  some stencilled. At Mutawinji we were told that only important people such as elders were allowed to have their hands painted and in other areas I saw childrens’  hands represented. 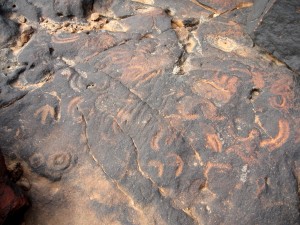 Water symbols (circle with dot) are naturally common in the desert areas (not seen in Arnhemland) both painted and carved as petroglyphs.

In Victoria’s Grampian Mountains there are short lines that are said to be tally marks, perhaps the number of ceremonies or people that attended them there.